Planning for the day's ride went down to the wire - neither a map nor a stage profile had been posted a couple of weeks before my departure, but I knew I'd be heading from Vaison-la-Romaine to Gap, via Stage 16 of the 2013 race.

I woke up before alarm, and suited up before heading down for breakfast.  I was invited to sit outside, but ended up in the shade which was a bit chilly.  I had nice a chat to the owner, Alex Labastide - his hotel building was built in the 12th century!!  It seemed in amazing condition, but was very difficult to photograph in the morning on account of trees and sun.

Breakfast wasn't a buffet, so was a little on the light side, but two eggs, a nectarine, a kiwifruit (!!!) and some bread and croissants, could have been a lot worse.  Nonetheless, I stopped at Super U on way through town for a top up.

My legs were feeling pretty crappy, but I tried not to worry about it, and made an effort to cruise along and enjoy the views of Mont Ventoux all morning.  There was some absolutely stunning resealed road on the Tour route, and they were careful not to overdo it unnecessarily.


Up the climb of the Col de l’Homme Mort, I wondered what was the story behind the name.  The climb was followed by a nice descent, and then a down-valley ride.  I stopped for a burger and fries soon after midday, feeling like I really need the energy boost.


The road soon headed into a spectacular gorge.  There was amazing twisting of rock layers, and abeautiful river running through it.  i saw a couple in bikinis down at the river, and no sooner had I asked myself “why bother?” when another couple, this time topless, appeared.


The end of the gorge marked the end of the descent and the start of a 40km false flat.  Progress felt difficult, but the scenery absolutely stunning, and the effort mattered not.  The mountains had a very ancient look to them, unlike the Pyrenees. 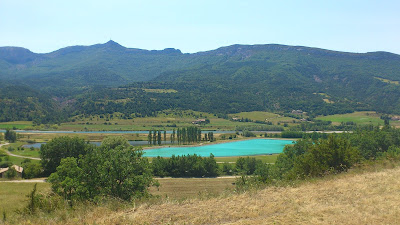 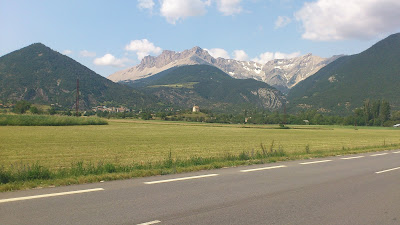 Eventually the very gradual climb ended at an indistinct saddle, beyond which was a steep drop into Gap.  The stage I was replicating did indeed finish in Gap, but not before a 20km loop featuring the Cat.2 Col de Manse.  As a result, my first visit to Gap was very short indeed, and no sooner had I entered the town, than I was climbing a steep bit of road out of it.

The gradient eased at turnoff from the highway with about 6km to go.  It was nice to recognise the open descent, and I was waiting for the corner where Armstrong made the famous shortcut through the paddock.

Somewhat ironically, not long before reaching that spot, I lose the rear end of my own machine with an almighty squirm.  Luckily, I had only a slow leak in my tube, and I wasn't hooning, so was able to bring bike to halt without issue.  I patched the tube and while doing so noticed the very square profile on my tyre.  It had served me well over the last 3000km - this was only my second puncture (the first had been about 20km into the tour, on the outskirts of Paris!) - but the tyre had obviously been leaving souvenirs behind!  I couldn't find anything in tyre, and the small hole was on a seam, so I suspected tube failure?  I made a note to replace both tyre and tube as soon as possible!

The hotel was right by the railway station, so again, was very easy to find.  I did a lap of town to see if I could spot a bike shop, but unlike the hotel, one proved elusive.

I treated myself to a bath, and then went out into the lounge for a catch up with Sarah.  I had a marguerita pizza and beer to tide me over.

I was low on cash so headed out for ATM, and stopped at a sushi bar for a second dinner.  A blind date with a fellow NZer who was in the vicinity fell through, as he hadn't made it to Gap.

Tomorrow, I'm off to Italy!