Managed to get away just after 7:15 this morning - the continental buffet was good, especially the all-you-can-eat baguette.  Loaded some with cream cheese and jam on my way out which made for a good morning tea.

The hotel had a big map in the foyer, which was great, and enabled me to make a whole bunch of route notes before I set off - today is about progress, not an old tour stage.

Had to ride through Châteaudun first off - fascinating how the towns are laid out with narrow footpaths and harsh frontages.

The ride plan today is pretty simple - it's about 190km roughly due south to Châteauroux, which happens to be where Oli Ferry's mum is from!  Unfortunately, there's a strong southerly blowing - and the wind turbines are making good use of it...

One of today's aims is to eat much more, and I'm getting better at spotting supply stops, "boulangerie" or "patisserie" are words worth keeping an eye out for.


Had pastries just north of Blois, and then called Kaitlyn from a McDonalds in Blois itself.  The early start and the time difference were handy, and meant I could talk to her before she went to bed.

The highway south was pretty busy, so took a dirt cycle path which soon spat me out on to a sealed cycle path through a forest.

After far too long to backtrack, the sealed path came to an abrupt end.  I could see the highway on my GPS screen, so set off in that direction.  There was a track, but it got pretty rough, and I decided to walk for a bit.  Probably just as well I've worn my MTB shoes...

The Tour is still a month away, but it is very exciting to see evidence of it.  Nearing Châteauroux, there was a sign warning of road closures in a month's time. 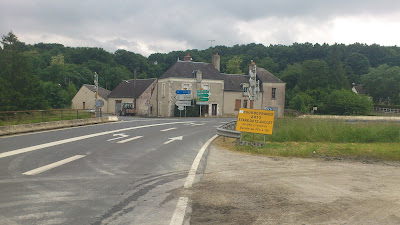 I stopped just short of Châteauroux for a pastry and coke, and then had a wonderful mushroom omelette outside in the town centre.  Aside from the food, Châteauroux marked the end of the 190km headwind, and I turned west-ward for the run to Poitiers.

I criss-crossed the highway for a while on a very quiet road, enjoying the cross-wind.  I had bananas and orange juice in Le Blanc, and admired the impressive viaduct off in the distance.

I'm finding the scenery really stunning, but it's kind of the opposite of New Zealand, at least in this part of France.  The towns are the highlights, rather than the land.   A sign welcoming me to Chauvigny proclaimed it "Unique en Europe".  Whether it was unique or not, it was quite a sight.

I hadn't booked accommodation in Poitiers, and the first places I tried were full.  Luckily, the (full) Ibis Budget were helpful, and not only called through to book me a spot at the Ibis down the road, but also gave me a voucher to get it at the Budget price.  Merci beaucoup!

The bathroom mirror lights in my room were very warm, so I hung my bib-shorts in between them to dry.

I had a big dinner: bacon wrapped salmon and a baked potato, and then collapsed into bed.

My body seems to be holding up well, and my brain seems completely at ease (except when I'm fretting about not speaking French).  My bike and gear are going great.